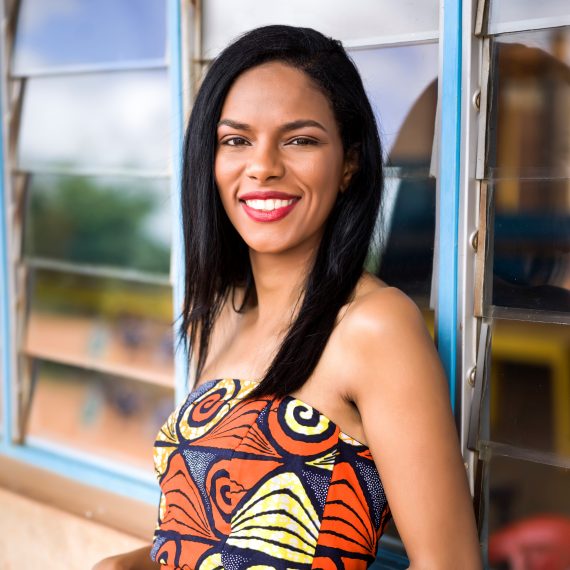 Philanthropist and international model Noella Coursaris Musunka is the Founder of Malaika, a grassroots nonprofit that works to educate and empower girls and communities in her native country of the Democratic Republic of Congo, and a Champion for The Global Fund to Fight AIDS, Tuberculosis and Malaria. Following the passing of her father when she was five and with her mother lacking the resources to look after her, Noella was sent to live with relatives in Europe. She benefited from a good education but has always been aware that many children in the DRC are not so fortunate.

After receiving a degree in business management, Noella was discovered and began a successful modeling career which took her from the pages of Vanity Fair and Vogue to a global stage. As she travelled the world, she discovered a platform from which to share her passion for human rights. In 2007, Noella founded Malaika alongside a team of probono professionals who donate their time and expertise. Malaika’s education and health programs are impacting thousands of people’s lives and are all offered free of charge. Malaika’s work takes 3 paths: an accredited school that provides a quality education to 280 girls and builds the leadership capacity of each student; a community center that provides education, health and sports programs to 5,000 people; and nine wells that supply clean water to 18,000 people.

Since 2017, Noella is a Champion for The Global Fund, the world’s largest partnership combating these diseases with governments, civil society and the private sector. Joining other Global Fund Champions like Bono, Charlize Theron and President Ellen Johnson Sirleaf of Liberia, Noella uses this platform to raise attention to the need for more investments in health and education and the intersections amongst the two areas.

Noella’s work with Malaika and The Global Fund has made her one of the most sought-after speakers on the subjects of education and health. She has spoken at countless venues as far-ranging as the World Economic Forum in Davos, WISE Summit, Global Citizen Forum, UNICEF and Cambridge University, and alongside Princess Caroline of Hanover at the AMADE plenary session and President Clinton on Clinton Global Initiative panels. She has been interviewed about her philanthropic work on CNN, has given a TED talk and presented in front of executives from multinationals like SAP and T-Systems. In 2016, Noella was named one of ELLE magazine’s “Incredibles”, 50 African women who are shaping the continent, and one of the BBC’s 100 most Influential and Inspirational women of 2017.

Alongside being a mother to two young children, Noella continues to work as a model but now her passion is to model with meaning, using her profile to raise awareness for causes she believes in as a mother, a feminist and a believer in the intrinsic human right to education, health and opportunity.